Skip to content
Flu Shot / It’s crucial to get a flu shot this year amid the coronavirus pandemic, doctors say

It’s crucial to get a flu shot this year amid the coronavirus pandemic, doctors say 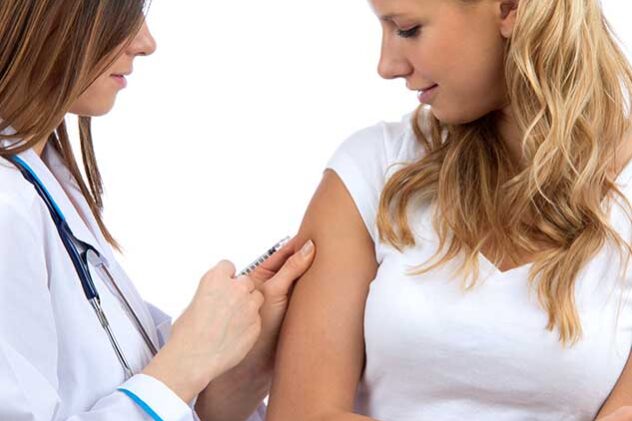 The message to vaccinate is not lost on Americans calling their doctors and pharmacists to schedule a flu shot appointment before the start of the 2020-2021 season.

Experts said it’s crucial to get vaccinated this year because the coronavirus pandemic has overwhelmed hospitals in parts of the country and taken the lives of more than 176,000 people in the USA, according to Johns Hopkins data.

It’s hard to know how COVID-19 will mix with flu season: Will mask wearing and social distancing contain flu transmission as it’s meant to do with SARS-CoV-2? Or will both viruses ransack the nation as some schools reopen for in-person learning?

“This fall, nothing can be more important than to try to increase the American public’s decision to embrace the flu vaccine with confidence,” Centers for Disease Control and Prevention Director Robert Redfield told the editor of JAMA on Thursday. “This is a critical year for us to try to take flu as much off the table as we can.”

Here’s what doctors say you should know about the flu vaccine as we approach this year’s season:

Who should get the vaccine?

The CDC recommends everyone 6 months and older get a flu vaccine every year. State officials announced Wednesday the flu vaccine is required for all Massachusetts students enrolled in child care, preschool, K-12 and post-secondary institutions.

“It is more important now than ever to get a flu vaccine because flu symptoms are very similar to those of COVID-19, and preventing the flu will save lives and preserve health care resources,” said Dr. Lawrence Madoff, medical director of the Bureau of Infectious Disease and Laboratory Sciences at the Massachusetts Department of Public Health.

When should I get my flu shot?

Dr. Susan Rehm, vice chair at the Cleveland Clinic’s Department of Infectious Diseases, said patients should get the influenza vaccine as soon as possible.

CVS stores have the flu vaccine in stock, and it became available Monday at Walgreens.

“I plan to get my flu shot as soon as the vaccines are available,” Rehm said. “My understanding is that they should be available in late August, early September nationwide.”

Other doctors recommend that patients get their flu shot in late September or early October, so protection can last throughout the flu season, which typically ends around March or April. The vaccine lasts about sixmonths.

The CDC recommends people get a flu vaccine no later than the end of October – because it takes a few weeks for the vaccine to become fully protective – but encourages people to get vaccinated later rather than not at all.

Healthy people can get their flu vaccine as soon as it’s available, but experts recommend older people and those who are immunocompromised wait until mid-fall to get their shots, so they last throughout the flu season.

What is the high-dose flu shot for seniors?

People over 65 should get Fluzone High-Dose, or FLUAD, because it provides better protection against flu viruses.

Fluzone High-Dose contains four times the antigen that’s in a standard dose, effectively making it a stronger version of the regular flu shot. FLUAD pairs the regular vaccine with an adjuvant, an immune stimulant, to cause the immune system to have a higher response to the vaccine.

Research indicates that such high-dose flu vaccines have improved a patient’s protection against the flu. A peer-reviewed study published in The New England Journal of Medicine and sponsored by Sanofi, the company behind Fluzone High-Dose, found the high-dose vaccine is about 24% more effective than the standard shot in preventing the flu.

An observational study in 2013 found FLUAD is 51% effective in preventing flu-related hospitalizations for patients 65 and older. There are no studies that do a comparative analysis between the two vaccines.

Is the flu vaccine safe?

According to the CDC, hundreds of millions of Americans have safely received flu vaccine over the past 50 years. Common side effects for the vaccine include soreness at the injection spot, headache, fever, nausea and muscle aches.

Dr. William Schaffner, professor of infectious diseases at the Vanderbilt Medical Center in Nashville, Tennessee, emphasized that these symptoms are not the flu because the vaccine cannot cause influenza.

“That’s just your body working on the vaccine and your immune response responding to the vaccine,” he said. “That’s a small price to pay to keep you out of the emergency room. Believe me.”

Some studies have found a small association of the flu vaccine with Guillain-Barré syndrome (GBS), but Len Horovitz, a pulmonary specialist at Lenox Hill Hospital in New York City, said there’s a one in a million chance of that happening.

Not only is the flu vaccine safe, but the pharmacies, doctors offices and hospitals administering it are also safe.

Horovitz and Schaffner said hospitals take all the necessary precautions to make sure patients are protected against COVID-19. Some hospitals send staff out to patients’ cars for inoculation while others allow them to bypass the waiting room. Doctors offices require masks and social distancing, and they are routinely disinfected.

“Call your health care provider to make sure you can get in and out quickly,” Schaffner advised. “It’s safe to get the flu vaccine and very important.”

Will it help prevent COVID-19?

Experts speculate any vaccine could hypothetically provide some protection against a virus, but there’s little data that suggests the flu vaccine can protect against the coronavirus, SARS-CoV-2, which causes COVID-19.

A study in 2018 found that the flu vaccine reduces the risk of being admitted to an ICU with flu by 82%, according to the CDC.

Doctors said it will be even more hectic this year because some flu and COVID-19 symptoms overlap, delaying diagnosis and possibly care.

What can we expect from this year’s flu season and vaccine?

Flu experts said they sometimes look at Australia’s flu season to get a sense of the strain and how it spreads, because winter in the Southern Hemisphere started a few months ago.

According to the country’s Department of Health surveillance report, influenza has virtually disappeared: only 85 cases in the last two weeks of June, compared with more than 20,000 confirmed cases that time last year.

“Australia has had a modest season, but they were very good at implementing COVID containment measures, and of course, we’re not,” Schaffner said. “So we’re anticipating that we’re going to have a flu season that’s substantial.”

Though some doctors may have both vaccines, others may have only one, depending on their supply chain. Natasha Bhuyan, a practicing family physician in Phoenix, said people should get whatever vaccine is available.

“Vaccines are a selfless act. They’re protecting yourself and your friends through herd immunity,” she said. “Any vaccine that you can get access to, you can get.”

Horovitz said vaccine production and distribution have been on schedule, despite international focus on coronavirus vaccine development. He has received his shipment to the hospital and plans to administer the vaccine with four strains closer to the start of the season.

“I don’t think anything suffered because something else was being developed,” he said. “(The flu vaccine) has been pretty well established for the last 20 to 30 years.”

Producers boosted supplies of the flu vaccine to meet what they expect will be higher demand. Vaccine maker Sanofi announced Monday that it will produce 15% more vaccine than in a normal year.

Redfield told JAMA the CDC arranged for an additional 9.3 million doses of low-cost flu vaccine for uninsured adults, up from 500,000. The agency expanded  plans to reach out to minority communities.

What about the nasal spray instead of the shot?

After the swine flu pandemic in 2009, several studies showed the nasal spray flu vaccine was less effective against H1N1 viruses, leading the CDC and the Advisory Committee on Immunization Practices to advise against it.

Since the 2017-2018 season, the advisory committee and the CDC voted to resume the recommendation for its use after the manufacturer used new H1N1 vaccine viruses in production.

Though agencies and advisory committees don’t recommend one vaccine over the other, some pediatricians argue the nasal spray is easier to administer to children than a shot.

Other doctors prefer the flu shot because some of the nasal spray side effects mimic respiratory symptoms, including wheezing, coughing and a runny nose, according to the CDC. Horovitz said anything that presents cold symptoms should probably be avoided, especially among children who are vectors of respiratory diseases.

“Giving them something that gives them cold (symptoms) for two or three days may expel more virus if they’re asymptomatic with COVID,” he said.